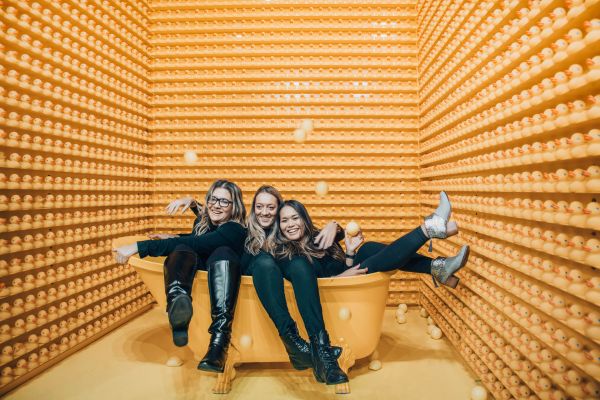 My mind is anxious. I’m under a lot of pressure right now and people don’t know it. At work, everyone sees me as the outgoing pretty girl, but inside, it’s an internal battle because I am in a competition with my girlfriends.

Both of my girlfriends are successful, making hundreds of thousands of dollars a year with careers on Wall Street and in Real Estate. They’re in their early 30s, single and pretty. And, they’re also nice.

Don’t get me wrong. I tell them I love them all the time and we get along well. We hang out together, even vacation together as girls. Boys love us as a group because we’re entertaining and challenging.

So what’s my problem? My girlfriends make me feel small. I feel like the loser of the group.

The Race to Poverty with my Girlfriends

My girlfriends spend money on things they don’t need, like stilettos, purses, perfume. For example, I spend $100 for my hair, which is cheap in New York City. My girlfriends, they spend $400 for the same color and the same cut, yet they’re still not happy with how it turns out.

I don’t make that kind of money but we’re a good team together, yet they expect me to live and fly the high life next to them. But I can’t afford it anymore.

They want to fly to Vermont, which is stupid. Who flies to Vermont when it’s only 4-hours away by car?

My other girlfriend has a rich boyfriend who buys her everything. She keeps pressuring me to find my own financial sponsor, but I don’t want it. I want to live my life the way I want to live it. I make enough money to feel comfortable in my life. Of course, I want to make more money in New York but I want to make it the right way.

My girlfriend gets money but she doesn’t make money. In exchange, she is losing her freedom. She is like her boyfriend’s puppet. He controls the strings. He tells her when to go out, what to wear. He even tells her what to eat. He wants to control the way she acts and she goes along with it. In exchange, she gets to experience the life of a socialite. He gets sex. A beautiful girlfriend. It’s like she is his pet.

I’m Not Jealous of Them

I want to make money my own way. I want to become a TV producer and make the big money with no pressure. I want to use my brain and not my body. I pay money to study at the University, so why aren’t I using it? Why should I just keep my brain in my head as an extra organ. I want to put it to use. I want to be in control of my life and I want to control my man.

I’m sick of talking about my smaller income with my girlfriends. They want me to live with them but I can’t afford it. My girlfriend asked me just last week, “Can’t you afford $1700 a month for rent so we can live together?” She threw out that number like it was only $17.

Last week, I introduced a new girl into our equation. I thought my girlfriends might like her because they have many things in common. But I was afraid they wouldn’t let her in. I was in the middle, forced to entertain both sides all night.

I look at the clock now and it’s 4am.

One day, this competition will come to an end and I will pass them. I’ll make my own money, use my brain and still keep my freedom.

Of course, I’ll still use my looks to get it.