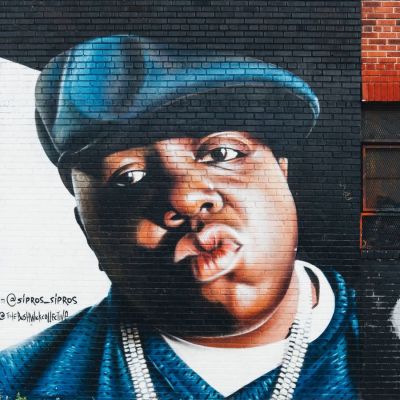 One of the first big East Coast rappers in the 90s was a Brooklynite named Christopher Wallace. You probably never heard of Wallace but I’m sure you’ve heard of Biggie Smalls.

As a young rapper, Biggie spent most of his time on Quincy Street and Bedford Avenue, freestyle rapping on the corner. That was when he wasn’t at George Westinghouse High School with future rap legends Jay-Z, Busta Rhymes and DMX.

Everyone could relate to Biggie’s music, making him worldwide famous by the age of 17. He was discovered by Sean Combs, a producer at Bad Boy Records more commonly known as P Diddy. Combs signed Biggie to his first album in 1994 and the rest is history.

Biggie was born and raised in Bed-Stuy. He was well-known around the neighborhood but before he was famous, Biggie bagged groceries at a local food mart, Met Foods, located at Madison Street and Jefferson Avenue in the heart of Bed Stuy. He also helped with younger Jewish kids at the early childhood center at Congregation Beth Elohim on Garfield and 8th Avenue in Park Slope when his Mom was teaching preschool there.

Country House Diner, located on Fulton in Bed Stuy was another popular hangout for Biggie and his friends, ordering a T-bone steak, egg and cheese, and grapefruit. The diner was featured in his famous video “Big Poppa”.

Biggie’s life ended in the prime of his fame, when he was 24 years old. He was shot and killed in Los Angeles after the Soul Train Music Awards. He was sitting in his car on his way to an after-party when a gunman shot him four times, killing him instantly.

Biggie’s presence is still seen all around Bed Stuy with murals honoring his life and legacy. On Bedford Avenue and Quincy Street in Bed Stuy you can see his most famous mural created in 2015. It stands three stories tall on a Bed Stuy residential building. Locally, they call it the King of NY mural.

In 2017, the tribute was almost torn down for a renovated building but an outcry from the local community saved it. There’s another smaller Biggie mural in Fort  Greene at Fulton Street and South Portland Avenue.