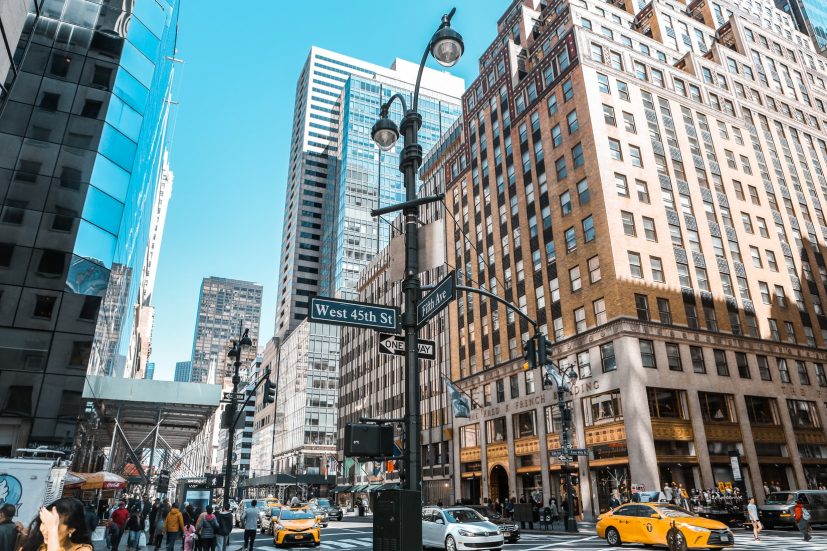 In 1948, the writer E.B. White rented a small, dingy, sweltering hotel room and scribbled these words for the classic book, Here is New York.

White was mesmerized by its crowds and how New Yorkers lived, packing themselves into subway cars and gigantic buildings as a routine way of life.

He wrote in his book that the quality of life was awful in NYC.

“Every facility is inadequate – the hospitals and schools and playgrounds are overcrowded, the express highways are feverish, the unimproved highways and bridges are bottlenecks; there is not enough air and not enough light, and there is usually either too much heat or too little,” White wrote.

“The city makes up for its hazards and deficiencies by supplying its citizens with massive doses of a supplementary vitamin – the sense of belonging to something unique, cosmopolitan, mighty and unparalleled.”

The pandemic might have altered the accessibility to New York, but the landscape hasn’t changed.

The Real New York behind the Book

The average New Yorker commutes more than an hour to work each way; public schools are under-funded and rent is astronomical.

Yet, despite all this, New York – or, more specifically, Manhattan – is perceived around the world as a glamorous place to live and work – an image perpetuated by the media, much of which is based in New York, financed or controlled from there.

Do Carrie from Sex and the City or Rachel from Friends represent the views or real women living in New York?

35-year-old Jennifer Cohen lives in Manhattan. She loves to shop, just like Samantha from Sex and the City. Yet Cohen – who moved to Brooklyn nearly nine years ago – admits that she’s struggling to live despite a salary of nearly $90,000.

“I think Sex and the City was bad because it made men think that women were really easy and always available,” Cohen said. “I don’t think that’s the true nature of women. At least that’s not the way I am, and my girlfriends are.”

However, Cohen empathizes with the frustration of the characters in Sex and the City, who continually experience rejection in relationships.

“Men here in Manhattan are quick to think there’s always another beautiful woman around the corner, no matter how ugly they are. So they don’t want to get serious, or make a commitment. In other parts of the country, men will settle down because they know there aren’t that many pretty women out there.”

So what about these men, who move to New York from all over the world? Does the city change them, or does it just attract restless types? Cohen has no doubts.

“This is a city full of beautiful women and that does change men,” Cohen said. “In a place like Rochester, a guy would find a girl his age and stick with her because there aren’t a ton of options. Here it’s easy to meet new people and move on. So guys’ standards are high, I think unrealistically so.”

Your perspective is shaped by where you stand.

Surely a woman who reports on nightlife would have some great stories about the glamorous side of Manhattan?

Julia Allison’s diary blog of her dating experiences is required reading for gossip columnists. When she lived in Washington D.C., the tabloids wrote about how she dated the eligible Congressman Harold Ford, as she later described on her blog.

Then she moved to New York City.

“A few weeks ago, a young guy who had once eagerly asked me out emailed me a shockingly straightforward ‘I’m just not that into you (so please stop stalking me)’ blow off missive,” Julia blogs. “In the three months since I’ve been officially single, I’ve gotten several rejections like that. Oddly, my response to each of them has been identical; previously uninterested, now I was hooked!  I wanted them all to fall madly in love with me and propose in Vegas, preferably next week.”

“Why was I once again susceptible to the irritating and completely masochistic ‘If he doesn’t like me, I like him even more’ syndrome? Why did my retarded brain fan the flames of desire every time a guy shot me down? What evolutionary or practical purpose does that serve, if any?”

Her experiences confirm what many women secretly confide.

As E.B. White wrote more than a century ago, “New York will bestow the gift of loneliness and the gift of privacy…. It can destroy an individual, or it can fulfill him, depending a good deal on luck. No one should come to New York to live unless he is willing to be lucky.”