Is This Doorman a Relationship Expert? 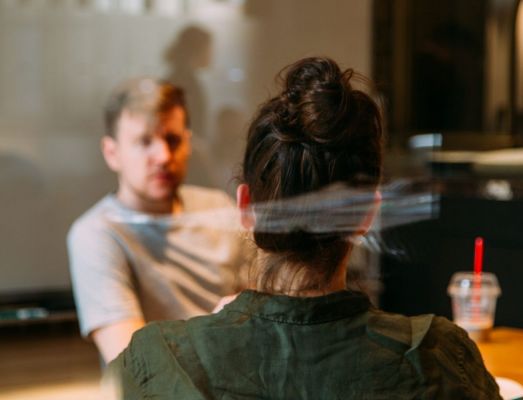 I heard a lot of things about Dan Collazo before I met him. I was told he had an uncanny ability to get into the minds of strangers without them realizing it.

With a resume that includes everything from truck driver to Army Vet and police sergeant, Dan found himself unemployed a decade ago when the economy tanked in New York City.

Always looking for a new adventure, Dan took a job as the doorman to a building in Downtown Brooklyn, located on the corner of Schermerhorn and Hoyt street. It was at this building that Dan says he learned some of his most interesting lessons about life in Brooklyn.

Who really pays attention to the doorman in their building?

Conversations aren’t censored as you walk past this invisible man who greets you every day. I would imagine most people don’t stop and think about how much information is being silently absorbed by this guy.

Yet, they are inadvertently feeding his brain with tons of useful information. Here is a little of what I learned about dating from my friend, Dan the doorman.

Just so you feel confident that you are dealing with an expert here; let me start by sharing that Dan has been in “over a hundred” relationships.

Now, whether that means he’s a “love em and leave em” kind of guy or just especially “lucky in love” is yet to be determined. Still, this does give Dan a rather large well of experience to draw from. He’s compiled a set of questions to ask your new girl or guy if you want to predict whether the relationship will succeed before it even starts.

Five Questions To Ask Before You Start Dating, according to Dan the Doorman

What is your two-year plan?

“Screw the five-year plans,” Dan says, and see what they want to get done in the next two years. The hidden motive here is an important one. What are your returns from investing in this relationship going to be and is she worth it to you? Is she a student? Be prepared to support her financially for the next two years since she will be making almost nothing. Is she worth it? That’s the bottom line that Dan is trying to make you think about before – and not after – you invest four years in the pursuit of love.

What are your hobbies?

What do you like to do when you get home at night or on the weekends? Dan believes you can learn a lot about people from what they choose to do on their down time – which I can support. He points out that if your boyfriend or girlfriend or potential date doesn’t have any hobbies, this is a huge red flag. A person without any interests is, quite simply, not an interesting person. Does she like to read? Good sign. Does he lounge in his bed watching Netflix and drinking wine from a box? Not such a good sign. You get the idea.

What is your favorite sexual position?

This is Dan’s most important question. (Why didn’t I see that coming?) Dan says this question needs to be asked after you have known the person for a while and he says it needs to be asked with a little bit of humor attached. He swears you can learn volumes from the answer. She likes missionary? Interpretation: she likes routine and predictability. Doggie style? She has a fun personality, but she probably avoids intimacy. Girl on top? Likes to be in control. Probably a little type A. He swears that if you base your expectation on these general conclusions, you will not be surprised down the road.

Who do you live with?

This is Dan’s deal-breaker. “Absolutely crucial.” Connecting on an emotional and intellectual level is important for sure, but sex is an imperative part of a successful relationship and women who live with roommates or family have a far less satisfying sex life than those who live alone (according to him, at least). She lives with roomies? Done. Move on. Harsh for sure, but that’s how he rolls.

Where do you live?

Being Brooklyn-based, Dan seems a little biased towards this borough by pointing out that agreeing to enter into an inter-borough relationship is the same as agreeing to enter a long distance relationship. As a Manhattan-based woman who spends the vast majority of her time in Brooklyn, I can’t say I completely agree with it but he did make me think twice about why my previous relationships may have ended.

These are the tidbits of relationship advice I garnered today and in only 15 minutes. Take it or leave it or even dismiss it; this man has some definite opinions and it seems to be working for him. I wonder what he would have revealed if we had more time.

6 comments on “Is This Doorman a Relationship Expert?”